*according to prevailing quantum theory

Schroedinger created his famous cat-hostile thought experiment as a demonstration of how ridiculous this idea was; a cat who is both alive and dead at the same time?

This theory, created by the father of famous rock star Mark Oliver Everett ("EELS"), has become the favored explanation among most (though not all) physicists, in spite of its not being directly testable.

Albert Einstein, when he wrote the famous quote "God does not play dice with the universe," was in a sense supporting the "Many Worlds" theory, which does away with randomness by postulating that everything happens, whether likely or not. Stephen Hawking has apparently also made statements which appear to support the theory.

In some popular books and movies, this theory is interpreted to mean "You can make your own reality." The theory, however, says no such thing; it merely says that subatomic events play out every which way, rather than just one way. Interpreting that to mean that you can have any reality you want is quite a stretch. Fun to think about, but not at all what the theory says. 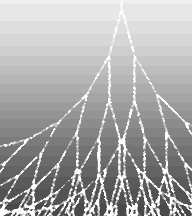